The art critic Félix Fénéon coined the term “Neo-Impressionism” for a style of painting that, according to its most important exponents, developed seemingly naturally from Impressionism. Common to both art styles was an interest in depicting natural light and a color palette that flaunted luminous possibilities seemingly encompassing the entire spectrum. But while we see in the leading Impressionists, such as Monet or Degas, a fascinating devotion to the moment that is also reflected in their painting style, the first and probably most important Neo-Impressionist surprises us with works that seem to have quite different roots.

For George Seurat received his education at the École des Beaux-Arts, during which he was able to study the classical works and thus acquired a solid technique in the formal representation of his objects. He now attempted to unite this with the prevailing trends of his time, and thus created works that, although clearly attributable to the 19th century, appear almost statuesque in their great clarity and austere composition.

In the course of his short life, he developed a technique that was refreshingly new in its time and gave his paintings a wonderful luminosity. In the style of painting known today as “pointilism,” the artist uses fine brushstrokes to systematically place pure colors on the canvas as individual dabs of color, and it is only from a certain distance that the human eye puts the dabs of color together, allowing them to merge into a single image. The most important work of this kind is without question “A Sunday on La Grande Jatte”.

The painting “Bathing Place at Asnières,” on the other hand, is far less well known, but as Seurat’s first large-scale work (it measures 2 by 3 meters), it marks an important turning point in his development. It depicts a group of workers on their day off, which alone was daring, since until that time religious, historical, or classical subjects were considered appropriate for large-scale depictions. But Seurat also consciously turned his subject against the currents of his time and painted members of the so-called “lower classes”.

Personally, I am fascinated by the figure of the young man sitting on the bank of the river and holding his feet in the water. Because everything about him seems to be taken out of life – his melancholic attitude, the badly cut hair and the mindless-dreamy look are like a timeless image of the youth who has not yet found his place in life. Still full of longing for the land of childhood, he seems to be furtively watching the boy in front of him, but behind him the land of grown men is already waiting with all its toil and hardship.

In other respects, too, the picture (despite its seemingly trivial subjects) is overloaded with references and allusions to life – for example, the ferry with members of the bourgeoisie forms a stark contrast to the tired workers on the shore.
Not without reason, this painting is considered a masterpiece and Georges Seurat one of the most important and influential artists of the late 19th century. 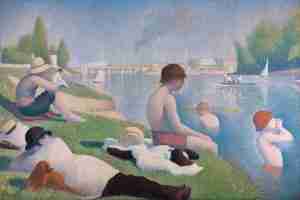