The history of the Carajillo

I was always convinced that red wine is the national drink of the Spanish. But in the meantime I have been enlightened that in reality beer and coffee are the most popular drinks in Spain.

What surprised me a little is how much the Spanish coffee tradition differs from ours.

As in Spain, one can watch at any time of the day and night how people sit down for a small coffee or enjoy one of the countless coffee specialities in a sociable round. 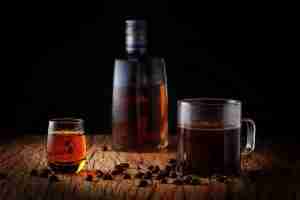 For us central Europeans, the Spanish coffee has another surprise in store.

Due to the higher percentage of Robusta beans and a special preparation method (during roasting sugar is added, which caramelises), the coffee tastes milder, but is much stronger than we are used to.

Moreover, one has to be careful (specially if one does not speak Spanish), as in Spain, there are many coffee specialities where a lot of alcohol is used.

A coffee of which the Spaniards themselves say that it spreads “fire on the tongue, velvet in the throat and warmth in the heart” is the Carajillo.

And although it is prepared with high-proof alcohol and is also very strong, in Spain it is drunk at any time of day, both at breakfast and after dinner.

There are two stories about its origin.

One goes back to the time when Cuba was still a Spanish province.

In those days, the Spanish soldiers, far from their homeland and the bosom of their families, were worn down in the senseless small war against the slaves of the sugar cane plantations and the local population.

In order to survive in this struggle, they mixed their coffee with rum and thus drank the necessary courage.

From the Spanish word for courage, however, “coraje”, the word Corajillo is derived, from which the present “Carajillo” was later created. 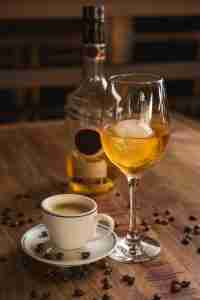 The second story takes us into the Barcelona of the early 19th century. At that time, Barcelona was already one of the biggest cities of the continent and at the same time the centre for the trade with the neighbouring kingdom France.

The main reloading point for goods was the railway station Estación de Francia in the east of the city, where countless carters delivered their goods every day.

As they were always overtired and in a hurry, they demanded that the waiters pour the rum into the coffee beforehand and hurry up.

“Posa’m-ho junt que ara guillo…” (Put it next to me, now I’m in a hurry) was the phrase they were known for.

By which the expression “ara guillo” later developed into the term “carajillo”.

But anyway, today the carajillo can be found in many different ways of preparation and every region of Spain has its special preferences.

In Catalonia, for example, it is prepared with a simple brandy and the sugar is served separately.

In the province of Castellón, on the other hand, the preparation is a little more complex. Here, the alcohol is first heated, partly burned in a glass and then poured on with the coffee.

But, as already mentioned, there are different ways of preparing it and depending on the region, the carajillo is mixed with whisky, cognac or rum.

And every province will be convinced that its carajillo is the only authentic one.

The easiest way to get to know it is probably to pour a strong espresso into a fireproof glass and offer some rum, whiskey or brandy and a little sugar.

But if you want to prepare a really unique carajillo, you should try the “quemado” (distilled) version. 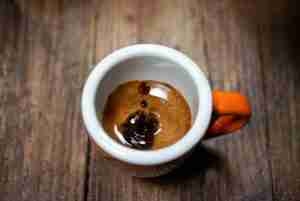 For this, one puts two coffee beans, some rum (or brandy) and a piece of lemon peel into a fireproof cup and heats it with the steam nozzle of the espresso machine.

Then ignite the mixture and caramelise a spoon of sugar in the flame, which you then pour into the cup.

Finally, place the still burning mixture under the espresso machine and extinguish it directly with the fresh coffee.

A particularly popular preparation in summer is the “Café del tiempo” (coffee of the season).

Here you usually get a carajillo prepared with anise liqueur and served with a glass of ice cubes.

The carajillo is now sweetened to taste, emptied into the glass with ice cubes and enjoyed cold.

More about the history of European coffee house culture and the Viennese kitchen (including the most beautiful recipes) can be found in my new book: 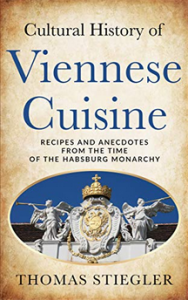