The history of the Gugelhupf

If there is an original Austrian dessert, it is surely the ring cake. It should not be missing from any menu. There is no old Austrian film in which it is not on the table, and the list of its fans – including Anton Bruckner, Franz Joseph, and Wolfram Siebeck – number into the millions.

Yet whether it really comes from Austria is not certain.

To be honest, the Gugelhupf is not an Austrian invention at all. Versions of it existed long before the name “Ostarrichi” was first found on a document.

Also, the honour of its rediscovery does not belong to us; it actually belongs to the French. But more on that later. 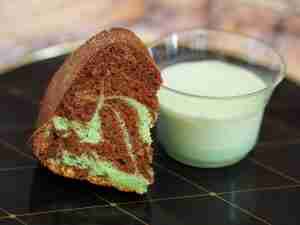 First, let’s get to its name.

We Austrians never wonder where the name comes from because we have been familiar with the word “Gugelhupf” since childhood.

However, if you think about it, this is a strange name for a cake. It consists of a reference to the word “ball” (germ. Gugel, Kugel) and to the word “bounce” (germ. hupfen).

So, perhaps it should remind us of a ball that bounces? This cake doesn’t bounce at all. Instead, it stands Sunday after Sunday in all its splendour on the white lace covers of Austrian coffee house tables, calmly awaiting its fans.

The truth is a bit more profane and, as always, comes from our story. However, it is still poetic enough to be told here.

“Gugel is an old German word, meaning a cap or blanket of the head.” 1

Anyone who has ever been to a medieval market has certainly seen this cap. Later, this name was also used for the headgear of the Capuchins. Thus, we come a little closer to the true story. For just as the reverend lifts his Gugel and reveals his tonsure underneath, so does the Gugelhupf.

For it is only in lifting the baking tin, i.e. the “Kugel” or “Gugel”, that this work of art reveals itself to us in its fragrant splendour. 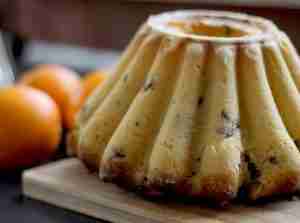 Throughout history, the Gugelhupf has been known by many names, such as ash cake, Bäbe, rodon cake, or pot cake. This shows that it is a very old and widespread dessert.

The ingredients with which the different cakes were made are, unfortunately, no longer known today. However, that is not very important.

This is exactly what is so special about this baked cake: It was never about the recipe itself, but always about the form to which it owes its name.

Versions of the Gugelhupf were known in ancient Rome, but it reappeared in our latitudes only in the 15th century.

This was because the most common form of the Gugelhupf requires yeast, which has been used in Europe only since the Middle Ages. The necessary yeast was produced by brewers and distillers and was sold as a by-product to bakeries.

In the 16th century, it spread rapidly and became a well-known specialty that also appeared in the first printed cookbooks, such as Marx Rumpolt’s “Ein new Kochbuch” (a new cookbook) from 1581.

“Take milk and butter in a pan / let it boil / stir in white flour / until it becomes thick / keep it against the fire and colen / dry it finely / take eggs / put it in warm water / thu the dough in a clean dish / and beat one egg after the other / stir it with clean hands / don’t make it too thick / also not too thin.

And such a dough can you need for spraying baked / and to the strauben / especially when you take a mug / make a hole in it / and draw the dough through hot butter.

You can also use it for small baking / and big brown baking / if you take small black raisins under it.” 2 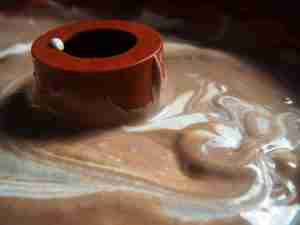 At the beginning of the 18th century, people were already talking about “Gogelhopfen” as “an old German meal”.

Only a hundred years later, in the Viennese Biedermeier period, the triumphal march of the Gugelhopf was unstoppable.

The bourgeoisie, politically thrown back onto the mental narrowness of its own four walls, increasingly sought comfort and distraction and found them in culinary delights.

And so the Gugelhupf, together with a cup of hot coffee, became the epitome of Viennese cosiness.

However, Vienna was not the only place where the Gugelhupf was widespread. In every country (yes, in almost every city), there was a variant of the Gugelhupf that differed greatly in terms of recipe and appearance.

As I said, it was the shape that gave it its name, and so the researcher Irene Krauß was able to write as early as 1999: “Depending on the region, the festive occasion and the economic fortune, the Gugelhupf was prepared from yeast, stirred or sponge cake dough either quite simply or with elaborate ingredients, i.e. lots of butter, almonds, lemon or raisins, and coated with chocolate or powdered with icing sugar.” 3

Finally, there are two little stories about the Gugelhupf and its distribution in France. 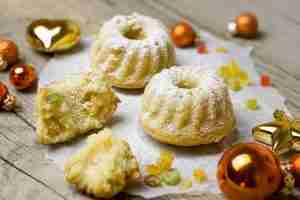 One of them tells us that the French queen Marie-Antoinette felt so lonely at the court of Versailles that she yearned for the familiar delicacies of her childhood.

Her mother, Maria Theresa, instructed the kitchen at Schönbrunn to send the recipe to her daughter, who introduced it to her royal court in Paris.

However, this contradicts the fact that, in many French museums, there are Gugelhupf moulds dating back to the 16th century. Therefore, it was apparently known in France long before Marie-Antoinette.

The French version of the story is a little different: On their way back from Bethlehem, the Three Magi travelled to Alsace, where they were warmly welcomed. In gratitude for this hospitality, they baked their hosts a delicious cake in the shape of a turban.

This is why the French believe that they are the true inventors of the Gugelhupf (or “Kouglof”, as it is also called) and that their little town of Ribeauvillé deserves the sole glory.

Last but not least, there is also only one Gugelhupf festival here (Fęte du Kougelhopf), which is celebrated every June.

So, my suggestion is to leave the fame to the French and concentrate on making ourselves comfortable in the family circle, with a hot coffee and a big piece of cake.

“The Gugelhupf is still today an indispensable part of the Viennese family breakfast (especially on Sundays) and the Viennese coffee snack. The Gugelhupf, with or without raisins, marbled, with or without chocolate icing or in an old Viennese style with almonds, has long since become something like a bourgeois status symbol for prosperity”,4 Franz Maier-Bruck said in the 1970s.

I guess there’s nothing more to add.