The History of the Viennese Schnitzel

In 1848 Europe was again in turbulence. In all corners of the continent were revolts against rulers, who sought, by all means, to become masters of the displeasure of the subjects.

However, the thoughts of freedom and political co-determination, once put into the world by the French Revolution, could no longer be suppressed, even by the strongest repressions. 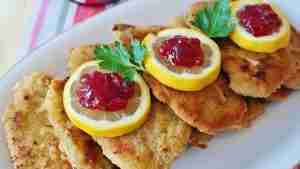 In Italy, the people also rose, but here the struggle took on a special colour.

The Apennine Peninsula, once the proud core of the Roman Empire, was divided into small dominions and was only a plaything in the hands of foreign powers.

In the early 19th century, the idea of the “Risorgimento”, the unification of the independent principalities and regions of Italy into an independent nation state, began to take hold.

In 1848, in the wake of the European riots, the time seemed right to put these plans into practice.

The fighting began in the south as an uprising against the Bourbons. It soon spread to the northern parts of the country, occupied by the Habsburgs. Starting from Milan and Venice, the people rose. Soon the Austrian troops had to retreat into their fortresses.

However, within a year, the tide would turn.

Not only did the Habsburgs suppress the riots in their core countries, but the uprisings of the Italians were also suppressed.

As a result, Lombardy finally fell to the Empire of Austria and Franz Joseph I appointed the victorious Field Marshal Radetzky as Governor General of Lombardy-Venetia. 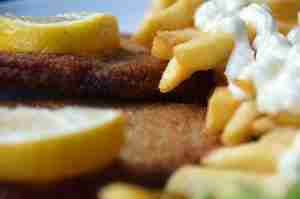 During his time there, Radetzky was said to have gotten to know the “Cotoletta alla milanese”, the Milan cutlet, which was created in the 15th century.

He seemed to have been so enthusiastic about it that, on the edge of a military report, he sent a note to the emperor, asking for the recipe at his next audience.

Franz Joseph’s personal chef changed the recipe a little and used juicy pieces of veal leg instead of chops. He also used the bread roll crumbs so beloved in Vienna instead of white bread crumbs.

The emperor, who was served the dish, was so enthusiastic about it that it immediately found its way into the court’s menu. From there, it conquered the entire empire.

As beautiful as this story sounds, it is unfortunately not true (like many others in this book).

In reality, various parts of pork or beef were breaded and baked in plenty of fat long before Radetzky.

If you embark on a journey to trace the history of the baked goods, you will have to go back a long way. The origin of the breadcrumbs begins at the moment when people were forced to recycle the remains of their food, long before our time.

For example, to prevent the wasting of old bread, it was grated into crumbs and used as a basis for various dishes. 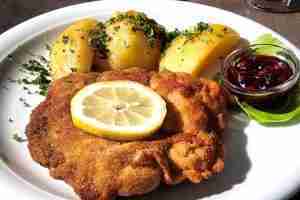 The first traces of baked meat can be found in 12th-century Constantinople, where this dish enjoyed great popularity.

However, the result could certainly not be compared to what we understand as a Viennese schnitzel today. The meat used, the type of breading, and, above all, the art of baking were not as perfect as we are used to today.

Sometime later, at the end of the 15th century, we again find ourselves in the north of Italy.

Among the aristocrats of that time, it was fashionable to decorate dishes with gold leaf. In part, this was for medical reasons, as doctors considered gold to be a remedy for the heart. However, the practice was intended mainly to demonstrate their own wealth.

When this custom became more widespread, and as more gold was literally “eaten”, the Council of Venice decided to ban it.

Therefore, chefs desperately looked for a way to keep the meat shimmering golden. They remembered a technique they had learned in Byzantium – the breading already described.

Within a few decades, this technique was to spread from the kitchens of Venice to the whole of Central Europe. 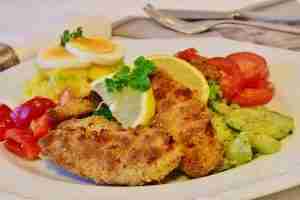 In particular, the Viennese showed themselves to be enthusiastic disciples of this new way of preparation. Soon they were known all over Europe for breading and baking everything you can imagine, from calf’s feet to offal to beef tail.

The schnitzel baked in breadcrumbs can be found only relatively late in Viennese cookery books, namely, in Ignanz Gartler’s “Nutzliches Koch-Buch” from 1740, which mentions a “veal schnitzel with Parmesan cheese and breadcrumbs”. 1

Of course, this can also be a sign that the Viennese was so familiar with baking, it was not necessary to write it down.

In any event, it is the case today that, although baked goods were served all over Europe, it is precisely the Wiener Schnitzel that is so well-known.

Perhaps this is due to a secret ingredient. Instead of the usual breadcrumbs, the Viennese used, from the beginning, breadcrumbs from their beloved Kaiseremmel.

Enjoy your meal and join the army of Schnitzel lovers, to which our old Emperor Franz Joseph belonged.

“…when we came from Gmunden to the plain, the sky brightened and we arrived in Lambach in the best weather, where we got schnitzel, which we ate with the greatest appetite”. 2

That was how the 14-year-old Archduke wrote it in his diary and that’s how we should do it: a hike in beautiful Styria and a golden schnitzel at one of the numerous innkeepers of this truly blessed country.